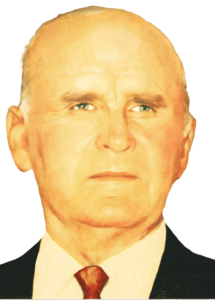 The Profile of The Great Prophet Branham

Bro. William Marrion  Branham was born of a very poor family in the hills of Kentucky

He was a sinner saved by the blood of Jesus Christ .Latter on He was filled on the Holy Ghost. Latter on God called for the ministry.

His life itself is a great ministry. He could not understand himself, until the angel of the Lord has visited him and explained the things scripturally to him.

He was born on 6th April 1909.Early in the morning when he was born; a great mystic light entered the little wooden cabin when his father opened the window to see the baby. The supernatural light came and encircled the baby and remains for some time.

From the age of 3,he was getting visions and dreams and latter on they were all fulfilled literally. From the age of 7 he was hearing God speaking to him. One day he was getting water in two buckets  for his father at the backside there was a maple tree, there he stood to take some rest, at that time he heard a audible voice ,telling Billy dont smoke, dont drink, dont defile your body in any way ,when you are grown up there is a great job for you to do. When he heard the voice, he was very much frighten , he ran home and fallen in the lap on his mother ,all the time crying, he said his mother ,A man is speaking to me  from the tree. Immediately she ran there to see what it was, she could not see anything, she thought he had some nervous trouble.

From that time onwards God was speaking to him on and often. When he was an young man, his father and his friend were drinking some liquor, at that time, his fathers friend had asked to join with them to drink, for that, his father said he is not a boy but he is a sissy ,he was put into shame and to over come that he took  a tumbler of liquor in his hand to dink, at that he heard a same voice from heaven telling, Billy I told you not to smoke, not to drink, not to defile your body in any way, there is a great job for you to do, when you are grown up. As he heard this voice ,he was frighten very much dropped the tumbler and ran away from that place.

It was a great mystery, why he was not allowed, not even to move freely with his friends. When he was doing the ministry as a pastor of the church ,one afternoon ,he was baptizing some people in the river Ohio , hundreds of people were standing  on the shore watching, as he was baptizing .As he was about to baptize the 17th person , a great mystic light had descended from the heaven and stood above his head from that great light a voice came stating , As  John the Baptist was sent to forerun the first coming of Christ, you have been sent with a Message to forerun the second coming of Christ.

The next day, this event had come in the newspaper, stating A brilliant mystic light had come and  stood above the head of the pastor ,when he was baptizing some people in the river Ohio.

The heaven had vindicated his ministry with super natural signs and wonders. At that time from Houston, Texas a hostile Baptist Reverent had criticized Christ Branhams ministry, and he was telling that all the miracles and wonders that happened in his  ministry are of the devil, so he arranged ,an open debate in a town hall and advertised in the newspaper, one Reverend Bass Worth a close associate of Christ Branham took up the challenge and quoted the scriptures, God id the healer and he is unchanging God ,this he had testified that the ministry of Christ Branham was of God.

The hostile pastor had taken a photograph to take photographs at various stages at the end of debate, Prophet Branham was asked to speak for a while at the time the photographs had taken a snap of Brother Branham while speaking. That night, a photographer went and developed the film in his Douglas Studio, to his astonishment he saw all the snaps had become blank except the photo of Prophet Branham he was wonder struck to see a super natural light over the head of Prophet Branham in a Halo position. This photograph was sent to FBI scientists to investigate. After various tests the chief scientist George J Lazy had testified that the negative was a genuine negative and he had testified that there was a supernatural light above his head while the film was exposed on this certificate this strong and unique photograph is kept in the US Congress Library, stating that was the first photograph even taken of supernatural light.

The scripture John :14:12 He that believeth on me .. was uniquely and specifically fulfilled in the ministry of Prophet Branham. Apart from the great sign and wonders that were happened in his ministry. The Prophet Branham had authority and control over the nature.

On one occasion he went for squirrel hunting he could not get any squirrel he was just sitting on a dry stump of a tree and he was wandering. At that time there came a voice from Heaven telling, “what ever you say will happen” and he said, ” let there be squirrel”. Immediately there appeared a squirrel out of nothing.

So, he had the power to create. There was countless numbers of miracles that happened in his life.

As he was at the end of Laodecean Church age, he had become the angel of the Laodecean church age.

There are three kinds of Mysteries in the Bible

(a) Mysteries in symbolic expression (Rev: 6)

(b) The  Mysteries hidden

Only Jesus Christ, the Lion of Judah, the root of David was entitled to reveal the unwritten mysteries (Rev: 5, Rev: 10 1-7).

So, to say Jesus Christ has become the quickening spirit after the ascension had come to the Church at this harvest time in another body The body of Christ Branham. Thus the Great  Prophet Branham was made the Christ, the first fruits of the harvest, thus Jesus Christ had visited the Church as the man- begotten by the woman the Church (John:16  2-21, Rev:12 : 3-5) .

At the harvest time we cannot see the Original seed that was sown, the only possibility to see the original seed in the form of the seed harvested. The way we cannot see the Jesus Christ any more in the same body. At the end of the harvest time, the Jesus Christ had appeared in the form of Christ Branham and accomplished various promises, even in the Millennium only Christ Branham will be sitting on the Throne.

To know more about this Truth in detail read our Messages