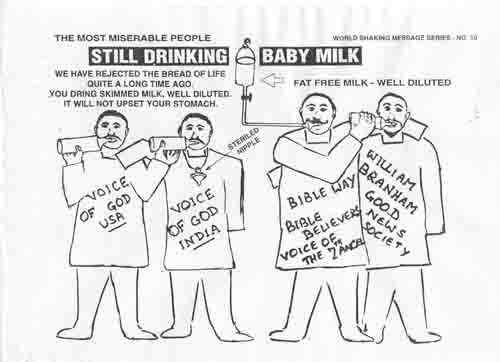 “… BUT THE CHURCH, WHEN IT OUGHT TO BE TAKING STRONG MEAT, IS STILL DRINKING MILK…”

“He took His own Son in the 17th Chapter of Matthew and took Him up on Mount Transfiguration and positionally placed Him as His law was He did it. And when He did that then we find out He followed His own laws and here He took ABRAHAM the same way. And you say, ‘Are you sure of that, Brother Branham? Yes, Sir, See, when He gave ABRAHAM part of HIS Name; positionally, put His name on the check the same as His was. His is ELOHIM: ABRAHAM. See? Gave him part of His own Name. There is a GREAT REVELATION there; and you realise I can run that farther than that, but the Church, when it ought to be taking STRONG MEAT, is still drinking milk. That is right. So He gave him HIS OWN NAME – ABRAHAM”.                                          – Abraham’s Covenant Confirmed.

At this end time the Lord had arranged His GREAT FEAST in the Kingdom of God, with STRONG MEAT full of FAT THINGS and MARROW, and WELL REFINED OLD WINE, just to REVEAL THE ENTIRE MYSTERY OF GOD (Rev. 10:1-7), and THE NEW NAME OF THE LORD!

“WISDOM has built a palace supported on SEVEN PILLARS (The seven manifested Sons of God – The Seven Messengers), and has prepared A GREAT BANQUET, and mixed with the wines, and sent out her maidens inviting all to come. She calls from the busiest intersections in the city, “come, you simple ones without good judgment; come to WISDOM’S BANQUET and drink the wines that I have mixed. Leave your foolishness and begin to live; learn how to be wise“.

“And on this MOUNT (ZION) shall the Lord of hosts make for all peoples A FEAST OF RICH THINGS [symbolical of HIS CORONATION FESTIVAL inaugurating the reign of the Lord on earth…], a feast of WINES, on the lees, of FAT THINGS full of MARROW. of wines on the lees well refined”.

And He will destroy on this mountain the COVERING of the face that is cast over the head of all people, and the veil that is woven and spread over all nations.

HE WILL SWALLOW UP DEATH IN VICTORY. HE WILL ABOLISH DEATH FOREVER; and the Lord God will wipe away tears from off all places…”

The very purpose of God raising THE GREAT PROPHET BRANHAM at this end time is to arrange this GREAT FEAST, and to send INVITATIONS to all the people, There is A MESSAGE in the Messages of Christ Branham. ONLY THE REVELATION OF THIS MESSAGE IN THE MESSAGES IS THE GREAT FEAST.

This MESSAGE in the MESSAGES was not made known by Christ Branham, and thus THE GREAT FEAST was not served at that time. But it was to be served at a later stage by THE LAST MESSENGER, to whom Christ Branham Himself had laid the foundation, and about whom He has mentioned very frequently in THE SEALS and other various Messages. But Christ Branham had sent the INVITATION to the people, and also He had instructed them not to miss THE FEAST “

“He that said that he that believeth on Me, the works that ‘I do shall he do also. “Oh, my !

“He that promised these things in the last days. He that said these things, He that is now in the time of THE REVELATION OF THESE THINGS BEING MADE KNOWN, “COME AND DINE”. Oh, DON’T MISS IT, MY BROTHER”. – Seals (112)

“Oh, my! I wish I could get that to the people. DON’T FAIL, DON’T FAIL, PLEASE DON’T THIS TIME. I am fixing to leave you, Don’t fail! If you ever listened, listen. These Seals are on the backside of the Book… when THAT SEVENTH ANGEL sounds out every mystery, IT IS OVER. LET HIM BE WHO HE MAY…” – Sirs, is this the time? (38)

The revelation of THE HIDDEN MYSTERIES revealed by THIS SEVENTH ANGEL ï¿½THE SECOND ELIJAH, IS THE GREAT FEAST that was served on the Mount Zion (THE TRUE BRIDE CHURCH)

THE INVITATION to THIS GREAT FEAST was sent by Christ Branham from the USA in the West. THE FEAST was served in INDIA in the East.

The so called believers of the End-time Message have rejected the INVITATION of God, and have missed THE GREAT FEAST. These people have become THE MOST MISERABLE PEOPLE by rejecting the Great Feast.

“… Jesus said in here that those that were bidden and turned it down, would not taste His – Is your life worthy of the Gospel (55) .

Thus, the so-called believers have missed the RESTORATION of the Children’s Faith to the Faith of the Fathers, the very PURPOSE for which God had sent His Son Christ Branham.

THIS IS THE TIME OF GREATEST BLESSINGS FOR THE BELIEVERS!

THE MOST HORRIBLE TIME FOR THE REJECTERS!

“… Heavenly Father, Ob, I just some time, Lord, stand here, and I TREMBLE. I think of that awful hour that is approaching, and there is no way to stop it. It is predicted that it would come. Now, I have thought of why don’t the people come and listen, and won’t they come and accept it? But of course I know that you have said they wouldn’t, so they won’t. But there is some that have got their names written on the Book of life, and when these Seals are thrown open there, they see their names there, and the Holy spirit speaks to them, they come” – Seals (224)

“Lord Jesus, the hours are growing late. It may be even later than we are thinking.:. And we are happy to see this hour approaching. It is THE MOST GLORIOUS HOUR that the world has ever known for the believer, but for the rejecter, THE MOST SADDEST TIME that could ever be… They couldn’t find words in the alphabet letter to make words, that could express the TROUBLE AND SORROW that lays ahead. And neither is there words could be formed from an alphabet to express BLESSINGS that lays ahead for the believers”. – Seals (113)

THE MARK OF THE BEAST

NOW EVERY THING IS OVER!

Till now the Lord has been revealing to His Bride, by FAITH, what He has achieved in the Church by the Holy Sprit. But now the Lord has begun to declare in plain terms, so that even the Unbelievers can understand by their knowledge.

Now, God has already rejected the make – believers, and He is going to destroy them

FLEE FOR YOUR LIFE!

REPENT AND SEE WHETHER ANY MERCY IS AVAILABLE FOR YOU.