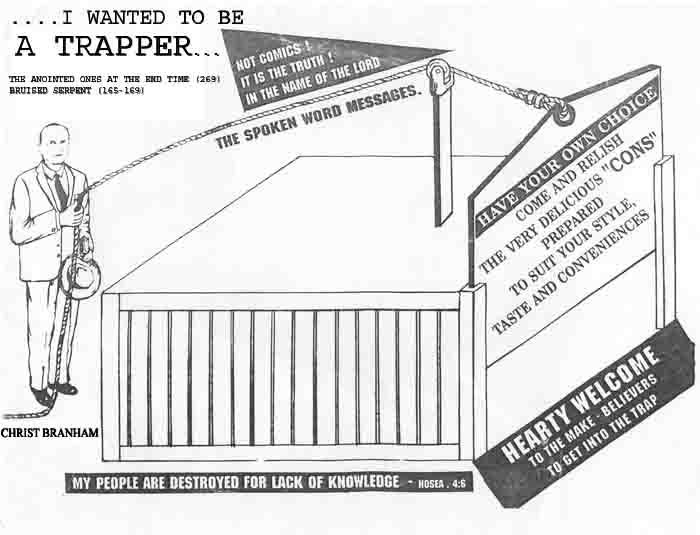 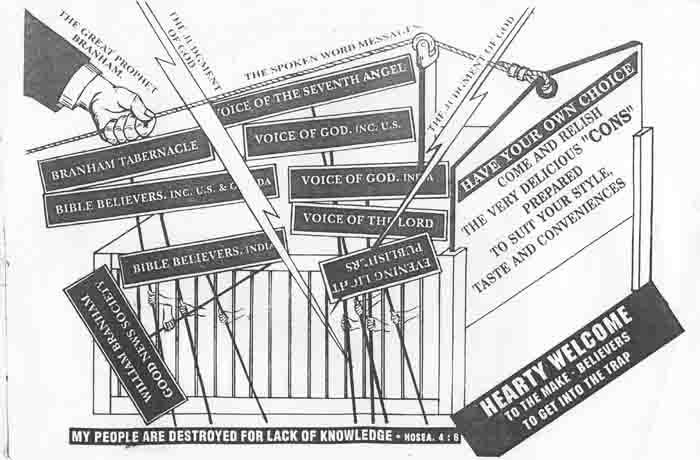 CHRIST BRANHAM, God has sent him to set a TRAP for the make-believers to fall into the trap and go into BABYLON!

And my voice, even against my better judgmentI wanted to be a TRAPPER. But it is the will of my Father that I declare to do, and am determined to do – Anointed ones at the end time (269)

I set a TRAP for you, O Babylon, and you were caught before you knew it; you were found and captured, because you opposed the LORD. -Jermiah.50:24

HOW DOES THE LORD set up a trap?

For this reason God sends them a Powerful delusion so that they will believe THE LIE and so that all will be condemned who have not believed THE TRUTH but had pleasure in unrighteousness.  – II Thessa 2:11, 12

The TRAP is set for the people, who refuse THE TRUTH, and want to go on their own carnal way.

HOW HAS CHRIST BRANHAM SET UP THE TRAP?

Christ Branham has kept PROS and CONS, and TRUTH and LIES in his messages.

I form the light, and create darkness; I make peace and create evil, I the LORD do all these things – Isa-45:7

If God sit upon a big throne here somewhere; say,Then faith would be void. We wouldnt have to have faith at all thenit looks mysterious and dark, see, you dont know how to do it. But by faith we believe it…the very thing that we are saved by is faith. And that is the reason there has to be some disagreement with it, so that we can exercise faith. Do you understand it now? You have got to have the other side. See? You have got to have a bad woman to make a real one out right .see? There has got to be a LIE to make THE TRUTH POSITIVE and make it shine good .if everything was truth, it would just be so common, see. See? …

Christ Branham, being a God sent TRAPPER, has kept both PRO & CON and TRUTH & LIE in his messages.

PRO- in favor or support of a statement

Whenever Christ Branham mentioned the TRUTH, he had spoken the truth with over-whelming enthusiasm. As a God sent TRAPPER, whenever he wanted to place the CONS, he had to say them quite against his own conscience, because it was the will of God.

But all that the Father has given me will come. Now, I want you to know this is sure. And you that listen to this tape, you might have thought today that I was trying to say that about myself being that I was packing this message. I have no more to do with that nothing, no more than JUST A VOICE. And my voice, even against my better judgment I wanted to be A TRAPPER. But it is the will of my father that I declare to do, and AM DETERMINED to do I was only A VOICE that he used to say it. It wasnt what I knew; it is just what I just surrendered myself to that HE SPOKE THROUGH  –  The anointed ones at the end time (269)

Christ Branham has told his followers to be WATCHFUL at THE WHITE STONE (Sirs, is this the time?). and also in his various messages He has warned the people that, SOMETHING is fixing to happen, and has told to look for the fulfillment of His promises to the Church. In spite of his repeated warning, His so-called followers, had left staying on the word and have gone off the TRACK, and have formed their own MINI BABYLONS (denominational groups), and under the influence of the spirit of anti-Christ, they have gone deep into Babylon.

COME OUT OF BABYLON BEFORE THE JUDGMENT STRIKES !

Even some of the children of Zion (THE TRUE BRIDE) have gone into Babylon for not believing the complete message of Christ Branham, and for taking only the passages that suit their conveniences, and that are appealing to their carnal mind.

Ho! Escape to Zion, you who dwell with the daughter of Babylon- zec.2:7

NOW IS THE TIME TO COME OUT OF BABYLON!

JUDGMENT IS JUST HANGING ON THE MAKE-BELIEVERS!

.he promised that these things would come in the last days and the seventh church age, at the end of it, when the messenger arrived; there it would be There would be revealed those broken Seals- they would be revealed, and here they are That is in the name of the Lord. Believe it friends. Come out of Babylon.Seals-223

Listen, when you feel that little funny feeling, you get away from the walls. Get away; you will die in there! Dont do it! Come out of it! Get away from that all that stuff! Flee to safety as quick as you can! Ask for mercy.

Heavenly Father, Oh I just sometimes Lord, stand here and tremble. I think of that awful hour that is approaching, and there is no way to stop it. It is predicted that it would come. but there is some that have got their names written on the Lambs Book of Life, and when those seals are thrown open there, they see their name there, and the Holy Spirit speaks to them, they come– seals (224)

and when this Seventh Angel rises in the Laodicean age and begins to sound forth the TRUE TRUMPET Because it will be contrary, they wont believe it. They sure wont believe it. But it will be an inspired prophet, because there is no way to figure it out Now, that is THUS SAITH THE LORD.

When he sounds forth that it wont fail, because he will be vindicated by the Word of God And when he does, he sounds forth to call from Babylon, come out of her my people and be not partakers of her sins. God send him-dont miss it

This day these prophecies are fulfilled! Amen. WHAT ARE THE PROS AND WHAT ARE THE CONS in the message of Christ Branham?

WHAT IS THE PROMISE OF GOD FOR THIS TIME?

The Restoration of CHRISTHOOD back to man is the Promise of God for this end time.

Restore the whole word of God again. THE FULL MANIFESTATION OF CHRIST IN HIS CHURCH. -Restoration of the Bride tree-(74)

The Lord has accomplished this restoration in two stages. First in a MAN -THE FIRST FRUITS of the harvest; and then in a group of people -THE INGATHERING of the harvest.

When we see Gods great purpose -revealing Himself, and having First, to reveal himself in Christ , the Fullness of the God head bodily, and then to bring that Fullness of Godhead bodily into the people, that he could have the preeminences – Christ is the mystery of God revealed (23)

The Great Prophet Branham is the Man in whom the Godhead was placed and the CHRISTHOOD was restored first. And he was made THE CHRIST- THE FIRST FRUITS of the harvest (Lk.17:22-26).he is the son of man that was to come at this end time.

(Please read our messages THE TRUE REVELATION of Heb 13:8. And Who is Bro. WILLIAM BRANHAM?)

MANIFESTATION of the Son of Man was in the USA in the west. And he REVEALING of the Son of M an is from India, in the East. East and west have become united. This is the end of the plan of redemption.

Anything against and contrary to the above mentioned fulfillments of the Promises of God for the end time are only THE CONS in the messages of Christ Branham.

It is a great pity that the so-called believers of the end -time Message have missed the very blessings that God of heaven has sent through the SPOKEN WORD MESSAGES. On the other hand these precious people have fallen into the TRAP set by Christ Branham, by believing the CONS, and ignoring the Promises of God for the end time.

“When a messenger was sent, to misconstrue his word or to doubt one word, it was total annihilation and Eternal reparation from god, to misconstrue that messengers Word – The end time evangelism (71)

Now the very Lord Jesus Christ, whom they claim to worship, has rejected the so-called believers of the end-time message. Very, very soon the judgment of God is going to consume them.

When the judgment strikes them, they will realize that this Short Message is THUS SAITH THE LORD.